A Farm Stand for Electricity 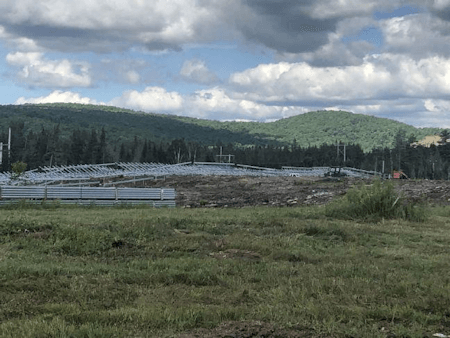 As originally published on suncommunitynews.com.

Imagine sashaying down to the local farmers market one weekend for chard, tomatoes and a little locally sourced electricity. While a bit of a stretch, obviously, this scenario is not as far-fetched as it might seem.

Indeed, Saranac Lake Community Solar plans to set up this summer at the local market to entice subscribers to sign up for energy from the sun, generated just a few miles north of the village on Rt. 86.

Community solar is part of a growing energy model across the country targeting users who are interested in green energy, but don’t have the property or finances to invest in an array of solar panels themselves. So instead they buy a subscription to a solar farm that supports renewable energy and also, through a system of credits, saves them about 10% on their power bill.

“It’s one of those offerings that sounds too good to be true, but this one really is,” said Mike Roach, director of business development for Sunvestment Energy Group of Frederick, Md., which is handling the project along with RER Energy Group of Reading, Pa.

The coronavirus pandemic has delayed completion of the project, but developers hope to have it operational by November said Sunvestment project developer Conrad Karsten.

The project will have an anchor tenant that buys about 40% of the power from the project, with the rest sold to about 200 to 250 individual and small-business subscribers.

Community solar projects have generated considerable interest in New York, which has pledged to produce 70% of its electricity through renewables by 2030. Gov. Andrew Cuomo has introduced measures to make renewables more viable, including the fast-tracking of site development.

By contract, the Saranac Lake project has taken a long and winding road, beginning in 1999 when Lee Keet of Saranac Lake bought 22 acres that was on its way to becoming a WalMart. And the solar farm comes with a couple of singularly Adirondackian twists.

After the solar panels are in place, five acres of ground will be seeded with low-growing natve wildflowers as part of a pollinator project sponsored by AdkAction, a Saranac Lake group that advocates for issues that improve the quality of Adirondack life. The plants support bees that are crucial to pollinating local fruits and vegetables.

As such, developers hope the project will become a model for other community solar projects that will serve the locales in which they are sited. That’s important not just for warm fuzzies, but as a practical defense against climate change and a centralized power system that, if it fails in one spot, can knock out the power for millions of people.

“Superstorm Sandy was a real wakeup call,” Roach said. A more severe climate and a less stable political world could expose weak links, and when power is centralized, a break in the chain can have catastrophic effects. Communities that generate their own juice, however, will be protected.

Karsten said the project’s anchor tenant has been identified and about half of the residential and small-business subscriptions have been sold. If not all are filled locally, “we’ll cast a wider net,” he said. Those who care interested can visit saranaclakesolar.com to learn more.

As originally published on suncommunitynews.com.