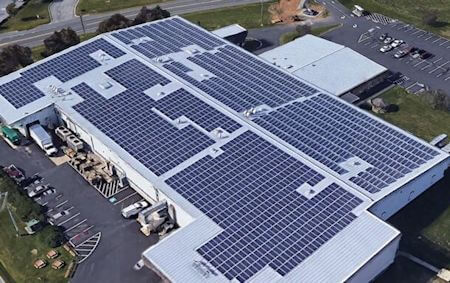 As originally published on prweb.com.

Just over one year ago, Horizon Goodwill Industries brought a 958 kW solar generating array online that was built in partnership with RER Energy Group, New Energy Equity, Pfister Energy and WGL Energy. The engineering calculations estimated the first full year of operation would have a generating capacity of 1.2 million kWh. Because weather can play an essential part in how much solar power would be created, Horizon Goodwill Industries monitored and tracked the total electricity produced. CEO, John McCain said, “We have worked diligently to develop best practices for making our Goodwill operation as green as possible. We believe in not only creating sustainable futures for our clients, but we also want to preserve natural resources for the future of our planet. One of the projects that was important to us was the solar array project. When we installed it, we knew it would be an excellent opportunity to reduce the number of trees cut down, barrels of oil used, and tons carbon emissions produced. Now we have solid data that proves it.”

“The report that tracked the generation and consumption of electricity states that the solar array exceeded its estimated annual generation capacity of 1.2 million kWh by over 200,000 producing 1,412,311 kWh of clean electricity,” said David Shuster, Director of Operations and Compliance. “The fascinating part is during the same period, our total electrical consumption at our Maryland facilities was 1,346,866 meaning that seven Horizon Goodwill facilities in Maryland that are part of this program were effectively operated entirely on sustainable green energy for the past year!”

According to the calculations provided by WGL Energy, this equates to just over 2,000,000 pounds of carbon emissions prevented, 21,000 trees saved, and is the equivalent of 110,000 barrels of oil. For 62 years, Horizon Goodwill has helped people find jobs, build financial stability, and strengthen families. During the past few years, they have worked diligently to create more programs that improve sustainability. Clean solar energy is one of Goodwill’s many energy-saving initiatives. Goodwill also installed LED light fixtures and has developed a recycling and reuse program that encourages donating reusable goods instead of disposal.

As originally published on prweb.com.