ATAS International’s First Solar Array Worked so Well, They are Moving Ahead with Another on Their Allentown, PA Facility 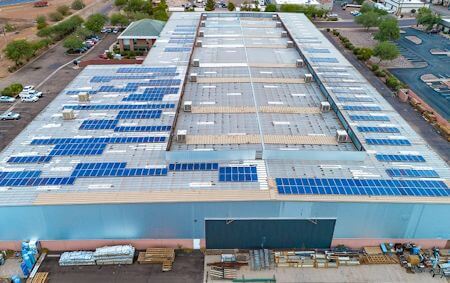 As originally published on designandbuildwithmetal.com.

Dick Bus, President of ATAS, stated the array will offset a substantial amount of ATAS’ annual electric usage, representing an important accomplishment in ongoing environmental and sustainability efforts. “We initially were going to install a system in Pennsylvania but decided to do the smaller Arizona installation first. It is producing electricity better than anticipated and we are moving forward with installing a 500 kW roof mounted array at our Grant Way facility in Allentown, Pennsylvania,” stated Bus.

According to Loretta Ottinger, the sales representative for RER Energy Group, the system consists of 576 roof-mounted, photovoltaic solar panels of 325 watts each. The array will produce more than 297,900 kWh (kilowatt hour) of renewable energy annually, resulting in energy cost savings in excess of $1.5 million over the life of the system. The system is expected to pay for itself within four years and three months. It made sense to focus on ATAS’ Arizona facility first, for a solar system installation; the Solar Energy Industries Association (SEIA) reported in June of 2018 that the state of Arizona is ranked third in the nation for the amount of solar installed, up from being ranked seventh in the prior year. A total of 3,463.4 MW has been installed in Arizona, resulting in 6.09% of the state’s electricity produced from solar. ATAS is proud to now be part of that solar growth in Arizona.

Solar installations continue to increase throughout the country. In May of this year, California regulators approved an historic plan to mandate rooftop solar panels on most new single-family homes built in the state. The California Energy Commission’s solar mandate, which goes into effect in 2020, received the support of homebuilder and solar trade associations as well as several large utilities. Currently, the SEIA reports that California leads the nation in solar installations, followed by North Carolina.

As a manufacturer of metal roofing, ATAS wanted to set an example on their own facility to show how solar and metal roofs can work together, resulting in a long-lasting, sustainable, and energy efficient system. It was noted that solar-ready metal roofing is the best solution for any building on which solar is being considered.

As originally published on designandbuildwithmetal.com.