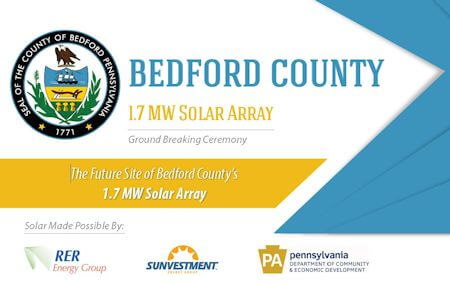 As originally published on altoonamirror.com.

Officials broke ground Wednesday for the construction of a new solar array at the Bedford County Jail, some of them describing the project as a forward-thinking investment that will reduce energy costs.

The 1.7 megawatt solar array, which will power the jail, courthouse and library, is expected to save taxpayers about $5.5 million over 30 years by significantly lowering the cost of electricity at the jail.

Bedford County Comm­issioner Josh Lang said with the solar array, the county will be able to lock in energy costs, saving an anticipated $100,000 the first year.

Sen. Wayne Langerholc Jr., R-Bedford, said the solar array will have a tremendous impact on the county’s economic development while Rep. Jesse Topper, R-Bedford, described the project as an investment in good infrastructure.

Dennis Davin, Depar­tment of Community and Economic Development secretary, said the state department contributed $900,698 to the project, calling it a critical component of Pennsylvania’s “diverse energy portfolio” and a way to reduce carbon footprints.

The solar array will provide 90 percent of the power for the jail, library and courthouse, according to Jim Kurtz, president of RER Energy Group, a project partner.

“Not everybody understands what solar can offer. There’s enough sunlight that hits the earth in one hour that could power all of mankind’s needs. People don’t know that,” Kurtz said. “There is also not awareness that for every dollar for the cost of a project, you’re going to capture $5 to $8 over time.”

The Bedford County Jail is the largest line-item in the county’s budget with electricity payments making up a majority of its operation costs, according to a press release.

The jail will spend an estimated $66,000 this year on electricity, said Michael Clapper, county administrator for finance and support. He said the jail is expected to spend $3,447,000 for 2018, excluding health care for employees.

Commissioner Barry Dallara said people saw value in the project and the action of investing in solar has set an example for others to follow suit.

Since 2009, DCED has approved more than 135 solar projects across the state, investing more than $75 million.

Pennsylvania gets less than 1 percent of its electricity from solar energy, according to the state’s solar future plan. In the plan, the Department of Environmental Protection is aiming to increase solar-powered electricity by 10 percent by 2030.

As originally published on altoonamirror.com.