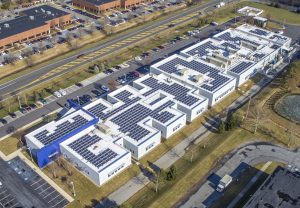 A bill aimed at curbing carbon dioxide emissions from Pennsylvania gas and coal-powered plants could boost business for companies in the clean energy sector if it becomes law.

Last week, members of the Clean Power PA Coalition announced their support of The Climate Change Mitigation and Energy Transition Act, which would instruct Pennsylvania’s Environmental Quality Board to slash power-sector emissions at least 90 percent by 2040. The coalition said the pending legislation would create an Energy Transition Fund to support programs that promote clean air and create jobs in communities across Pennsylvania by expanding the use of renewable energy and energy efficiency.

Sen. Jay Costa (D-Allegheny County) is the prime sponsor of the legislation, which includes co-sponsors across the state.

Costa said in a statement that Pennsylvania has already made important strides toward reducing greenhouse gases, but the needs to do more to achieve the emission reductions targeted by Gov. Wolf’s in an executive order issued earlier this year. It is also needed to ensure Pennsylvania is not left behind in the burgeoning growth of clean energy technologies and jobs.

A new set of regulations forcing power plants to reduce their carbon emissions by 2040 would make energy from gas and coal-powered plants more expensive. And that’s a good thing, said Tom Schuster, senior campaign representative for the Sierra Club in Johnstown, a member of the Clean Power PA Coalition, because it would benefit the state’s renewable energy economy by making prices more competitive, he said.

The legislation would provide economic benefits for RER and other local solar companies, he added, citing the multiplier effect of jobs created for companies that install and manufacture solar projects in addition to those that provide supplies and electrical wiring for solar systems.

“Solar is sound local economic development policy and there should be more initiatives like this current one to spread its adoption,” Kurtz said.

One of the local benefits of solar power is that less money goes to electricity providers outside the region, keeping more money in the local economy, he said.

Kurtz also believes that climate change is an issue affecting the livability of the planet, and an issue that carbon emissions exacerbate.

“It’s definitely real and I don’t know how bad it’s going to get,” Kurtz said. “I went into solar because I thought this was happening in the world.”

Pennsylvania ranks fourth in the nation in total carbon dioxide emissions, according to 2016 data from the U.S. Energy Information Administration, which showed the state emitted 218.6 million metric tons that year.

The legislation could create limits on carbon pollution but also direct how the state could spend additional revenue, he said.

“If the board decides to set carbon limits for the entire sector, they would be creating a set of allowances that individual power plants would purchase,” Schuster said.

As an example, for every ton of carbon a company emits, it would have to purchase and retire an allowance for that ton, Schuster said.

“If there’s revenue generated through the sale of allowances, the bill specifies how that revenue should be spent,” Schuster said. “It’s focused primarily on efficiency and solar, mitigating the cost on the impact to low-income consumers and economic transition.”

Potentially, 50 percent of that revenue would go toward investments in solar, he said, which would be a boost to companies that design and install solar systems in Pennsylvania.

“The additional revenue would essentially bolster the entire industry,” he said.

What impact could the bill have on the fossil fuel industry?

Schuster believes coal as an energy source is on its way out. “The only question is, how fast?” he said. “If you had a limit, it would accelerate that trend.”

However, the leader of a Harrisburg-based organization that advocates for the coal industry described the legislation as misguided.

“We are already meeting the goals that were set in the governor’s climate action plan,” said Rachel Gleason, executive director of the Pennsylvania Coal Alliance. “The market has taken care of that on its own. Having some package that’s specific to Pennsylvania would be misguided because we participate in a 13-state regional transmission organization,” Gleason said.

As a result, residents from Pennsylvania receive their energy from all those states in most cases, she said.

An effort to remove an energy source such as coal from the energy mix in Pennsylvania means that other states could still use coal to produce energy that would serve Pennsylvania residents, she said.

“We have very few coal plants in Pennsylvania,” she said.

Several have shuttered, are scheduled to close or are transitioning to natural gas.

Taryne Williams, a spokesperson for Talen Energy, owner of Brunner Island, said in a statement that the company is unable to comment having not had the opportunity to fully review the act.

According to Schuster, nuclear could be following coal.

“Solar and wind will eventually push out nuclear,” Schuster said. “They are going to be on their way out, the question is, when?”

However, one major nuclear power plant operator appears to favor of the bill.

“While we have not seen the specific legislation, Exelon Generation commends the Clean Power PA Coalition for supporting efforts to dramatically reduce carbon emissions in Pennsylvania,” said Liz Williamson, spokesperson for Exelon Generation in Kennett Square, in a statement.

Exelon owns and operates several nuclear power plants in Pennsylvania through Exelon Nuclear, including the Limerick Generating Station in Montgomery County, and Three Mile Island in Londonberry Township, Dauphin County, which is set for closure this month.

“We believe any plan to address climate change must include the preservation of Pennsylvania’s nuclear plants, which keep electricity costs stable for consumers, provide 93 percent of the state’s zero-carbon electricity, and account for 16,000 jobs,” she said.