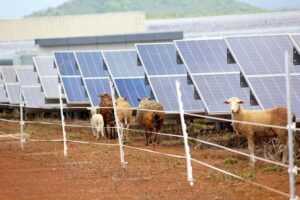 As originally published on kleinmanenergy.upenn.edu

The economic and energy footprint of the American agricultural industry is considerable. In 2014, on-farm operations consumed 1,714 trillion Btu of energy– close to 2 percent of the country’s total energy consumption — and, in 2019, the agricultural sector employed 22.2 million people in full-time and part-time positions.

Against a backdrop of trade tensions with China and the economic devastation caused by COVID-19, it is worth better understanding the economics of American agriculture and the potential applications of renewable energy to stabilize farm incomes and sustain livelihoods in rural America. This conceptual link is just one strand of the wider food-energy nexus — the intimate connection between processes associated with agricultural and food production and energy production and consumption — which we plan to explore in a new Kleinman Center research initiative.

This year hasn’t exactly been fortuitous for American farms: In aggregate, the U.S. Department of Agriculture projects farms to take in $358 billion in cash receipts in 2020, the second-lowest amount since 2013. Alarmingly, most American farms have been in a relatively precarious position for several years now, and don’t have the financial breathing room to afford such a crisis. While larger farms have enjoyed steady revenues in the past decade, farms with less than $100,000 in gross sales — making up 82% of farms — have seen positive net incomes only once. Operating profit margins have also experienced significant volatility since 1998, ranging between roughly 5 and 20 percent.

The USDA considers farms to be in a “critical zone” if operating profits are less than 10 percent of a farm’s gross income (including government payments). In 2018, 71 percent of all American farms were in the critical zone, including 81 percent of low-sales farms and 75 percent of farm-owners who are dependent on off-farm income.

It’s easy to discount the importance of small farms, which generally earn less than $350,000 in gross income. However, 90 percent of American farms match this profile, make-up half of American farmland, and responsible for 21 percent of production. Small farms are especially significant for the health of rural economies and local ecosystems.

Unsurprisingly, energy inputs represent a significant source of variation in farm operating costs. As the chart below illustrates, oil prices exhibit a high degree of correlation with crop prices (r = 0.78). This suggests that reducing volatility in energy prices — or, at the very least, smoothing them out — could help farmers stabilize their finances and reduce their exposure to economic uncertainty.

For a number of crops, energy inputs constitute a substantial proportion of farmers’ production costs, and fuel price volatility can cut into farm incomes and pose risks to the economic welfare of rural communities. The cost of fuel, electricity, fertilizer, and chemicals have generally kept pace with other operating costs through the twenty-first century, and the USDA projects that these costs will continue to increase in 2021.

How can we supplement farm incomes and minimize the risks posed by volatile energy prices? This is where renewable energy comes in: The construction and operation of renewable energy systems can, under the right circumstances, reduce farmers’ energy costs and offer a secondary stream of income to traditional farm operations.

Already, many American farmers rely on other sources of income to support their farms. In fact, for small farm owners, off-farm income makes up the overwhelming bulk of household income, as seen in figure 5. Income associated with energy production is becoming an increasingly important part of total farm income — as much as 6% of gross cash income in Pennsylvania and Oklahoma — sometimes exceeding government payments.

In fact, there is already some evidence that renewable energy makes economic and operational sense for farms, particularly those that are smaller and may depend on off-farm sources of income. Renewable energy systems pose little risk to farmland or surrounding ecosystems, can (in certain cases) improve yields and land productivity, and can be adopted by most farms no matter their size, type, or location. Just in the past decade, renewable energy take-up on American farms has accelerated dramatically, and much of this take-up has been driven by smaller farms, in terms of both acreage and gross sales.

Renewable energy systems have demonstrated benefits to farmers in terms of their profitability, sales, income streams, and commercial resilience. In future blog posts and digests, we will explore other dimensions of the food-energy nexus, and see how renewable energy can benefit, and benefit from, farms both domestically and globally.

As originally published on kleinmanenergy.upenn.edu