Canandaigua, NY Readies Itself for a 2.49 MW Solar Array and to Begin Saving Approximately $3.5MM in Electricity Costs 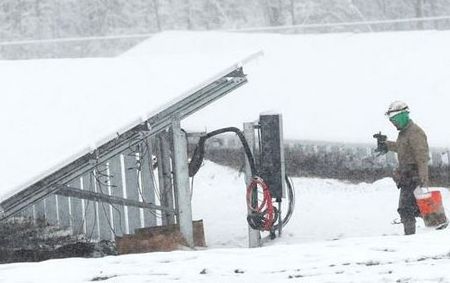 Sparked by a city decision awhile back to become more earth-friendly and save money, the final stage of the project is now winding down on 10 acres near the intersection of county roads 10 and 46. Construction of the first phase wrapped up on an adjacent 10.5 acres on County Road 46. Assistant City Manager John Goodwin said Tuesday he expects the solar farm to be up and running in the next two weeks.

How big, how much power?

The farm on County Road 10 near the County Road 46 intersection is a 1,628 kilowatt DC solar installation. It has 5,200 solar modules and 34 solar inverters. It’s expected to produce an estimated 2,132,000 kilowatt-hours (kWh) annually – enough that could power 221 homes for a year.

City officials estimate a savings of about $3.5 million over 25 years, with a first-year benefit of roughly $55,822. At the end of the 25-year agreement, the city has the option of renewing an agreement, purchasing the array or having it removed at no cost to the city.

Startup required no local funding because the farm is owned, operated and maintained by an out-of-state party that specializes in solar energy.

The solar farm equipment is owned and operated by Ohio-based AEP Onsite Partners, a division of American Electric Power. AEP foots the bill for the equipment and securing and monitoring it. There are a security fence, signs and a high-tech monitoring system running 24 hours a day, 365 days a year to deter intruders and wildlife.

578 Homes that could be powered for one year

94% City facilities that farm will power