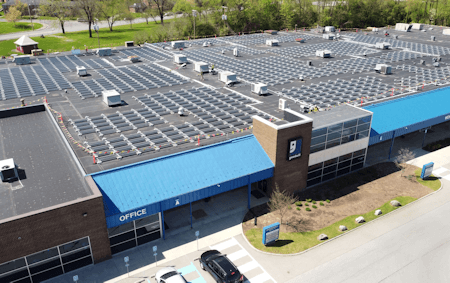 As originally published on roanoke.com

One of the largest rooftop solar energy projects in the Roanoke region is now operating at Goodwill Industries of the Valleys.

The nonprofit recently installed solar panels at its jobs campus building on Melrose Avenue. About 90% of the building’s electricity will be generated by renewable energy, reducing annual carbon dioxide emissions equal to that produced by burning 581,000 pounds of coal.

“The new array will save us money and be a long-term solution to rising energy costs,” Jackson Green, chief financial and compliance officer of the organization, said in an announcement Monday.

The solar panels will have a maximum capacity of 548 kilowatts at any given time, and over a year will produce up to 742 megawatt-hours of electricity.

While solar has been growing in the Roanoke Valley, it so far consists mostly of relatively small arrays of panels on the rooftops and grounds of homes, businesses and institutions such as nonprofits and colleges.

The region has yet to see a utility-scale project, which would generate greater amounts of electricity that would go directly into the power grid, as opposed to being used to offset the power bills of individual users.

Energix-US announced plans in the spring to construct a solar farm on 220 acres in the Westlake area of Franklin County, between Virginia 122 and the Bettys Creek section of Smith Mountain Lake.

The project faced criticism from the lake community, and in September the company dropped its plans. An Energix official told county officials that the company was working to find a more suitable location.

A company official could not be reached Monday.

Appalachian Power Co., which serves about 530,000 customers in Western Virginia, does not currently draw any of its electricity from utility-scale solar operations.

The first such venture will involve Appalachian purchasing power generated by a facility that is under construction in Campbell County. The goal is to complete the Depot Solar Center, which will consist of a 150-acre bank of solar panels, by the end of the year, according to Appalachian spokeswoman Teresa Hall.

On a smaller scale, Appalachian has about 2,000 customers that are using net metering, a billing mechanism that credits solar energy users for the electricity they don’t need and add it to the grid. Most of those customers — 1,951 as of last month — were residences.

The amount of solar energy is not large enough to even register on Appalachian’s power portfolio, which currently consists of about 80% from coal and natural gas.

In 2013, the Veterans Affairs Medical Center in Salem built a collection of about 6,000 solar panels on a field at the eastern edge of the hospital campus. The array was capable of producing as much as 1,629 kilowatts of electricity — enough to provide about 10% of the power to the sprawling VA complex.

At the time, it was described as the largest solar energy project in Southwest Virginia.

For Goodwill, the installation at its Roanoke Jobs Campus follows an earlier, smaller project at its Salem location.

“The money saved will provide for more opportunities for future investment in people, programs and new ventures which will strengthen our mission and the communities we serve,” Green said.

As originally published on roanoke.com