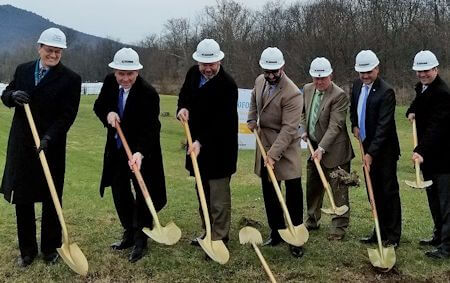 As originally published on bedfordgazette.com.

State and local leaders gathered for a ceremonial groundbreaking Wednesday outside the Bedford County Correctional Facility for the county’s new solar array set to save millions of dollars in energy costs over the next three decades.

Bedford County earlier this year was awarded a grant of more than $900,000 to install a solar panel system outside the jail along Imlertown Road.

The panels are expected to save the county about $5.3 over 30 years.

“These dollars saved will be essential in operating and DeShong managing these types of facilities without requiring tax increases for local residents,” Davin said. “That’s what we’re doing here — that’s what this is all about.”

The county entered into a 25-year purchase agreement — with an option to extend — with Reading based RER Energy Group, which will build and maintain the panels. The county will buy the energy generated by the panels at a fixed rate.

“As a county we will be able to leverage the fuel from the sun to power the county facilities at a lower cost than we pay today,” Commissioner Josh Lang said. “We’ll be able to lock in energy costs for many years, allowing us to be cost effective.”

Lang added the panels are expected to save about $100,000 during the first year.

The Bedford County Correctional Facility is the largest line-item in the county’s budget, with electricity payments being the largest cost of operations for the facility, according to officials.

The project is one of many selected as part of DCED’s Solar Energy Program through the Commonwealth Financing Authority. More than $30 million was approved for various energy distribution projects in the state, including $870,000 for a similar array for Bedford Borough.

“Projects like this are critical components to Pennsylvania’s diverse energy portfolio,” Davin said. “Solar projects provide opportunities for us to reduce our carbon footprint while reducing the costs of doing business.”

Executive Deputy Secretary Ramez Ziadeh of the Department of Environmental Protection said solar energy is a focus of the state moving forward as a way to reduce carbon dioxide emissions.

“This project is expected to remove up to 1,600 metric tons of carbon dioxide from the air,” he said. “This will really help address the real public health and environmental challenges associated with these emissions.”

Ziadeh said electricity generation in Pennsylvania is responsible for 32 percent of the state’s greenhouse gas emissions.

“We have a great opportunity here for energy innovations to reduce these numbers,” he said.

The DEP has a goal of greatly increasing electricity generated through solar panels during the next decade.

Ziadeh said about 0.1 percent of electricity in Pennsylvania comes from solar energy sources. He said the goal is for that number to grow to 0.5 percent by 2021 and to increase to between 4 and 8 percent by 2030.

If the department reaches its solar goal, greenhouse gas emissions from electricity generation could be reduced by 9 percent, Ziadeh said.

Jim Kurtz, president of RER Energy, said the panels set to be installed outside the jail will provide the equivalent of energy needed to power 300 homes.

He said solar energy offers great opportunity for both public and private entities.

“Not everybody understands what solar can offer,” he said.

State Sen. Wayne Langerholc said the solar project in Bedford County will be a model for other municipalities.

“It’ll be a road map for other counties and municipalities,” he said. “… This is something that will be copied going forward.”

State Rep. Jesse Topper said the solar panels are an example of an investment in infrastructure.

“Investment in good infrastructure in Pennsylvania will allow us to continue to grow,” he said.

“We set an example here today,” he said.

Commissioner Paul Crooks said the project was a result of cooperative work.

“It’s an example of what can happen when everybody can sit down at the same table and talk about completing a project,” he said.

The solar panels are set to be installed in the spring, depending on weather. Lang said the panels are expected to be operating by July.

As originally published on bedfordgazette.com.