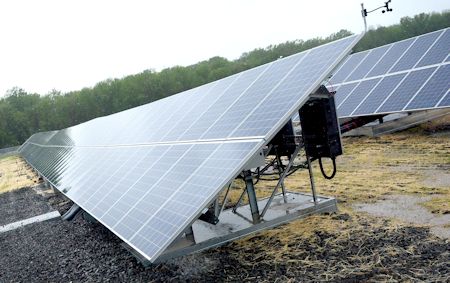 But the city’s use of solar power is expected to generate much sunnier fiscal and environmental news over time.

The city’s 4.1 MW solar array, which earlier in the year earned Canandaigua an honor from the New York Conference of Mayors, was officially commissioned Thursday. A ribbon-cutting ceremony marked the occasion.

Everyone has a right to a healthy environment and bright future, said Canandaigua Mayor Ellen Polimeni. And this step to provide it was a collaborative effort among the city and town of Canandaigua, as well as other government agencies and private partners.

“Renewable energy is where it starts,” Polimeni said.

More than $1 million in New York State Energy Research and Development Authority grant money helped the city move forward with the project, which was approved in 2014 and comes with no cost to taxpayers, Polimeni said.

Over the period of a 25-year agreement, the array is expected to provide $3.5 million in electricity cost savings and provide a large portion of the energy needed to run the city’s metered facilities, which include City Hall, the police station, fire stations and more.

Jim Kurtz, owner and president of RER Energy Group, which developed the system, praised the vision and courage of city leaders for seeing the benefit of solar at a time when not everyone was sold on the sun’s power.

“It’s not easy to be an early adopter of technology,” Kurtz said. “The reality is, solar will generate savings for the community.”

The company earlier in the year developed a system for the village of Clifton Springs, which went online in February. The village is expected to save $400,000 over 30 years.

State Sen. Pam Helming, who was town supervisor at the time the idea for the Canandaigua project was getting off the ground, praised town staff for helping with the necessary approvals. The installation is expected to produce the equivalent of the yearly use of 578 homes.

“The project is a win for the community and for the environment,” Helming said. “From a dump, to this.”

13,200 The number of solar panels in the solar array that was commissioned Thursday

5.3M The number of kilowatt hours the installation is expected to produce annually