New York Village of Clifton Springs to Save $400,000 in Electric Costs Thanks to New Solar Array 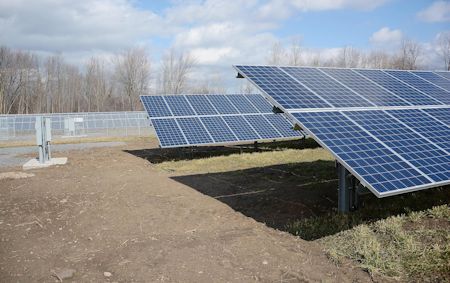 At first, Clifton Springs Mayor Bill Hunter wondered if the proposition before him and other village officials was for real.

But over time, the proposal for a 351.54-kilowatt photovoltaic solar array introduced in May 2014 began to make more financial sense, and served a larger different purpose, Hunter said during a ceremonial ribbon-cutting event and tour of the array site Thursday.

Ninety-seven percent of scientists claim that fossil fuel use is leading to climate change, Hunter said. And here was an opportunity to make a difference, on a small piece of land the village really had no use for, for a village that likes to be on the “cutting edge of things,” he said.

“To that end, one of our responsibilities is to do the best we can to stop that situation,” Hunter said. “We’re excited about the possibilities.”

In all, 1,134 ground-mounted solar panels are collecting the sun’s rays behind the village’s water treatment facility on Ladue Avenue. They became operational Dec. 27, 2016, and are expected to produce more than 414,000 kilowatts of lower-cost renewable energy every year.

The array, which was developed at no cost to the village, will offset about 84 percent of the village’s facility energy use, resulting in more than $400,000 in cost savings over the 30-year life of the system, according to officials from RER Energy Group. The Pennsylvania-based company built the system.

The electricity generated goes into the grid, and the village gets a credit, according to Bob Raeman, a senior project manager with Hunt Engineers in Rochester.

If, say, $1,000 worth of electricity is produced, that amount of money will be deducted from the village’s bills until the credit is exhausted.

“Residents benefit in that tax money does not pay for power,” Raeman said.

Walt Pieschke, solar project developer with RER Energy Group, said this is a proven system that will take the village 30 to 40 years into the future.

“It’s so exciting to see that they’re really considering the residents, the environment and the community,” Pieschke said. “It’s really going to help in the long run.”

While several communities — Canandaigua among them — are making use of solar arrays, others are holding off. Some are taking a wait-and-see approach on solar systems, as the town of Manchester has done in approving a six-month moratorium.

Bringing this project to fruition was not an easy task, said Marti Barto, asset manager with AEP Onsite, which owns the array.

“Many communities, villages, cities and towns talk about renewable energy projects, but the village of Clifton Springs made it happen,” Barto said.

One reason that other communities may be holding off is that solar energy still is a new concept to many communities, Raeman said.

“A lot of them don’t get past the words ‘solar’ and ‘upstate New York,’” Raeman said. “This one is probably the one I’m most proud of to bring to fruition, for all of the obvious reasons.”