Oil Slump No Longer a Curse for Renewable Energy 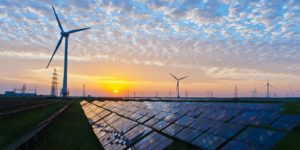 Low oil prices are usually a curse for green energy, but this time might be different.

The collapse of the crude market has seen prices fall below zero for the first time in history. Yet Royal Dutch Shell Plc this month outlined a bold program to slash carbon emissions and invest in clean energy, while Eni SpA said Friday it’ll consider accelerating its ambitious climate plan.

There’s always been tension between calls for Big Oil to tackle climate change and their investors’ doubts about the profitability of spending on renewables. Historically, a plunge in crude prices has tended to undercut costlier clean energy, prompting companies to divert dwindling financial resources into their core business of fossil fuels.

What’s different this time is that the cost of renewables and natural gas has broken away from oil, weakening crude’s influence on the price of electricity. While the coronavirus has destroyed demand for oil and transport fuels, power use has dropped less sharply. And importantly, energy companies are now painfully aware of the mounting pressure from consumers — and investors — to clean up their output, rein in emissions and prepare for a future beyond oil.

“The situation is totally different since the last time oil prices were this low,” said Nick Boyle, chief executive officer of solar company Lightsource BP. The cost of solar is a 10th of what it was during the recession of 2008 to 2009. Even as crude has slumped, “in the last few weeks we have announced new deals on nearly 400 megawatts of new capacity in the U.S. alone,” he said.

Transport is dominated by oil, especially in aviation where battery power or renewable fuels have virtually no presence. So any investment today in a hydrocarbon project is a bet that the impact of the coronavirus will be temporary. That could be a risky assumption.

The lockdowns imposed around the world to slow the spread of the virus have hammered almost every part of the global economy. In France for example, tight restrictions on movement have reduced power demand by about a fifth but wiped out 70% to 90% of consumption of gasoline and diesel. Similar patterns have emerged in other European countries and the U.S.

Unlike during previous price slumps, cheap fuel is no incentive for people to drive or fly because they can’t leave their homes. Even if travel restrictions are eased in the second half of this year, the International Energy Agency expects global oil demand to fall by a record 9.3 million barrels a day on average in 2020.

Gasoline demand has cratered as people stop driving to the office

A lot depends on how long lockdown habits, such as working from home and replacing business travel with video conferences, will continue to reduce demand from transport. That in turn will depend on things far beyond the control of the energy industry, such as the development of comprehensive virus testing, or possibly a vaccine.

Any recovery in demand will be gradual, given the damage done to the global economy, according to London-based consultant Energy Aspects Ltd.

Prior to the Covid-19 outbreak, Energy Aspects was forecasting a demand increase of 5.6 million barrels a day from 2019 to 2025, according to Matt Parry, head of long-term analysis. Its models are now showing that number is more likely to be around 3 million barrels a day because of the huge drop in consumption this year.

Behavioral changes resulting from the virus could affect long-term growth in oil demand, though existing trends, such as the surging middle class in emerging markets, will help drive consumption higher into the 2030s, Parry said.

While the impact of the coronavirus is concentrated on oil, the crisis in the industry is so large that investment in clean energy could suffer collateral damage.

Even before the pandemic, major crude producers were still feeling the effects of the previous slump — deep spending cuts, elevated debt and questions about the sustainability of their huge dividends. Now they’re reducing investment again, with cuts of about 20% from Shell, BP Plc and Total SA.

Shell Chief Executive Officer Ben van Beurden conceded to investors last week that the oil slump wasn’t helping the energy transition. “I don’t think I’d be honest if I said: ‘No, no, don’t worry’.” Yet he’s still willing to tie the pay of executives and 16,500 other employees to a target of reducing greenhouse-gas emissions as much as 3% by 2021.

BP boss Bernard Looney, who has set out one of the industry’s boldest plans to curb carbon, sent his Dutch counterpart a message of support on LinkedIn. “Ben — I agree. Despite all that is going on, we must keep our eye on the future and helping the planet.”

Meanwhile, Eni CEO Claudio Descalzi said Friday that the Italian oil company’s long-term plans for the energy transition remain unchanged amid the market rout, and it will pursue them with “determination.”

Having made green commitments, the risk to their reputations from scaling these pledges back would be too big, said Fiona Reynolds, CEO of the Principles for Responsible Investment, which has 3,000 signatories with more than $90 trillion in assets under management.

Shell’s Van Beurden has promised that his company will spend $1 billion to $2 billion on new energies this year, increasing to as much as $3 billion in 2021. Yet neither Shell nor BP have provided a blueprint on how much they will invest in clean energy to fulfill their pledge to eliminate the bulk of their emissions by 2050.

Both oil majors will report quarterly results next week, but the big test of their commitment will come later this year when both plan to give investors more detailed plans.

“To us the real question — and real proof — is how much capital are they putting toward this transition?,” said Heike Cosse, engagement manager at Aegon Asset Management, which has shares in Shell and has voted in favor of climate resolutions.

Renewables represent just a sliver of oil majors’ overall spending and portfolio today, but if fuel demand remains suppressed, the balance will continue to tilt.

“People will be very reluctant to consume at the rate that they have been consuming before,” former BP CEO John Browne said this week on Bloomberg Television. “The behavior of people changed as a result of the virus. I would not be surprised if you look at oil prices being much lower for longer.”