As originally posted on pv-magazine-usa.com.

Pennsylvania’s solar trade association, PASEIA, is calling for the state to reach 6 GW of in-state solar power by 2025, including almost 2 GW of distributed solar.

The goals are in line with a longer-term trajectory of 10% solar by 2030 evaluated in “Pennsylvania’s Solar Future Plan,” a report published by the state’s Department of Environmental Protection in late 2018. That report said that 11 GW of solar would provide 10% of the state’s electricity.

Nearly 5 GW of Pennsylvania solar projects are in the PJM Interconnection’s queue, as shown in this table from PASEIA’s presentation:

Pennsylvania is currently operating under a renewables target set in 2004, to reach 8% renewables, including 0.5% solar, by 2021. “We are on track to surpass” those goals, said Pillar, noting that an increase “would provide an important signal to the industry that Pennsylvania is open for business once again.”

Last year, bills introduced in the Pennsylvania Senate and House had goals of 30% renewables by 2030, with 10% solar, said PASEIA President Ron Celentano in a presentation at the annual meeting of the Mid-Atlantic Solar and Storage Industries Association. “After much lobbying, these bills didn’t get very much traction,” he said, adding that “more Republican legislators are interested” in PASEIA’s new solar target of 5.5% by 2025, which translates to about 6 GW.

Pennsylvania’s Governor Tom Wolf last fall spoke in support of solar power at the groundbreaking of a 70 MW solar installation that will power Penn State.

The authors of “Pennsylvania’s Solar Future Plan” considered the 10% by 2030 solar target to be “both ambitious and achievable.”

“The modeling project was not designed to identify the least-cost mix of generation,” explained PennFuture Energy Center Director Robert Altenburg, who served as project coordinator for the plan development process. “The premise of the modeling was that if policy decisions were made to significantly expand solar, what would the pathways to that expansion look like and what would the results be? A number of stakeholders suggested we use IPM modeling or other tools to look at broader questions, but that was outside the limited scope of this project.”

A commenter on the draft plan questioned whether the 10% by 2030 target was “ambitious,” given that other nearby states are requiring more. The department replied that Pennsylvania “has the potential for considerably more than the 10 percent goal modeled, but is currently at 0.25 percent (300 MW) solar generation. An increase to 10 percent by 2030 (11 GW) would require a significant ramp up of deployments.”

Here are photos of solar installations built by three firms that are members of PASEIA and/or Renewables Work for PA: 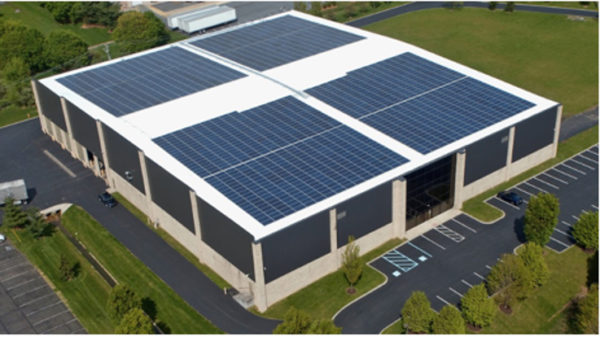 This 620 kW system in Allentown, Pennsylvania was built by RER Energy Group.

As originally posted on pv-magazine-usa.com.