Renewable account for most new U.S. electricity generating capacity in 2021 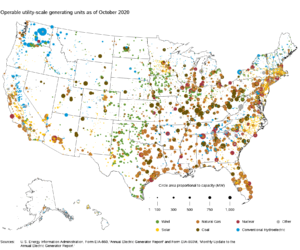 As originally published on eia.gov

According to the U.S. Energy Information Administration’s (EIA) latest inventory of electricity generators, developers and power plant owners plan for 39.7 gigawatts (GW) of new electricity generating capacity to start commercial operation in 2021. Solar will account for the largest share of new capacity at 39%, followed by wind at 31%. About 3% of the new capacity will come from the new nuclear reactor at the Vogtle power plant in Georgia.

Solar photovoltaics. Developers and plant owners expect the addition of utility-scale solar capacity to set a new record by adding 15.4 GW of capacity to the grid in 2021. This new capacity will surpass last year’s nearly 12 GW increase, based on reported additions through October (6.0 GW) and scheduled additions for the last two months of 2020 (5.7 GW). More than half of the new utility-scale solar photovoltaic (PV) capacity is planned for four states: Texas (28%), Nevada (9%), California (9%), and North Carolina (7%). EIA’s Short-Term Energy Outlook forecasts an additional 4.1 GW of small-scale solar PV capacity to enter service by the end of 2021.

Wind. Another 12.2 GW of wind capacity is scheduled to come online in 2021. Last year, 21 GW of wind came online, based on reported additions through October (6.0 GW) and planned additions in November and December (14.9 GW). Texas and Oklahoma account for more than half of the 2021 wind capacity additions. The largest wind project coming online in 2021 will be the 999-megawatt (MW) Traverse wind farm in Oklahoma. The 12-MW Coastal Virginia Offshore Wind (CVOW) pilot project, located 27 miles off the coast of Virginia Beach, is also scheduled to start commercial operation in early 2021.

Battery storage. EIA expects the capacity of utility-scale battery storage to more than quadruple; 4.3 GW of battery power capacity additions are slated to come online by the end of 2021. The rapid growth of renewables, such as wind and solar, is a major driver in the expansion of battery capacity because battery storage systems are increasingly paired with renewables. The world’s largest solar-powered battery (409 MW) is under construction at Manatee Solar Energy Center in Florida; the battery is scheduled to be operational by late 2021.

The utility-scale values in this article refer to net summer capacity reported to EIA by developers and power plant owners—respondents to EIA’s annual and monthly electric generator surveys. In the annual survey, EIA asks respondents to provide planned online dates for generators coming online in the next five years. The monthly survey tracks the status of generators coming online in the coming year based on reported in-service dates.

As originally published on eia.gov