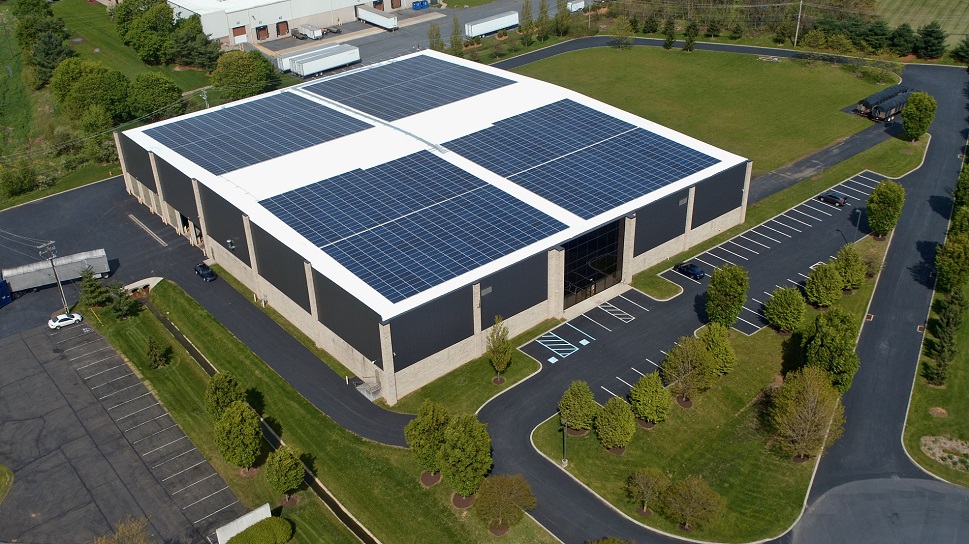 As originally published on lvb.com.

ATAS International marked the completion of the installation of its solar array on Monday.

The manufacturer, based in Upper Macungie Township, put in a 620.1-kilowatt photovoltaic roof array that will generate more energy than is used at the company’s Grant Way location. In addition, the company will use the excess energy to benefit its other nearby building on Snowdrift Road, which serves as its headquarters, said the company’s president.

The array cost a little more than $1 million to install and the estimated payback is two and a half years, said Dick Bus, president of ATAS.

He said the company decided to install it as a way to reduce its costs and carbon footprint.

“It’s a payback of two and a half years, it just made economic sense from a business standpoint.”

The clean energy produced by the array would avoid 441 metric tons of carbon dioxide from entering the environment, she said. That’s the equivalent to the electricity use of 66 homes in one year, she added.

The system consists of 1,908 roof-mounted photovoltaic solar panels of 325 watts each, and the renewable energy that’s produced would result in a 100 percent reduction of electric costs at the Grant Way site and more than 50 percent per month at the company’s headquarters, Ottinger said.

She sees the popularity of solar arrays increasing for businesses as the price of solar energy decreases.

“The price of solar has dropped 70 percent in the last seven years,” Ottinger said.

Though the state incentives for solar energy have disappeared, the incentives did what they were intended to do by making businesses aware of the benefits of solar power, she said.

Bus said it was a big investment but noted that it is driving down the costs of doing business.

“We were skeptical at first, but the numbers made sense,” said Jim Bus, executive vice president of ATAS.

The solar array is on a 60,000-square-foot building built in 2005 and used by ATAS strictly for manufacturing.

The white-paneled aluminum roof reflects the ultraviolet rays of the sun, generating electricity for the building.

And on the south facing wall of the building, an ATAS product, called InSpire, also uses the sun’s energy to heat the building, Bus said.

ATAS is also planning to start construction on a new facility in August that should be complete about a year from now, Bus said. That facility, which will be 490,000 square feet, will also have a solar roof installed once the building is complete, he said. The building will go up on vacant land at 8364 Main St. in Fogelsville, a western section of Upper Macungie Township. That site will eventually house all of the company’s 100 local employees and could potentially become a net zero building, he added.

Net zero buildings produce as much energy as they consume.

ATAS, which produces metal roofing, panels, and other products, also has a manufacturing site in Mesa, Arizona, in addition to its two Upper Macungie Township locations. ATAS also has a sister company it owns, Brightsmith Coaters, with facilities in Morrisville, and Trenton, N.J.

As originally published on lvb.com.