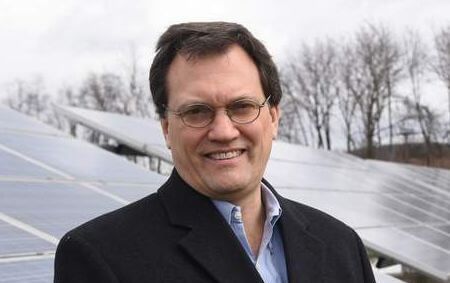 As originally published on www.readingeagle.com.

Money doesn’t grow on trees, but it does fall from the sky, according to Jim Kurtz.

“It is money from the sun,” said Kurtz, a Harvard MBA, Wharton School graduate, and Oley Valley High School alumni. “But people aren’t aware that the cost of the bucket has fallen 70 to 80 percent in the past five to seven years.”

“Put the bucket on the roof and collect that value. We’ll go to somebody and say ‘do you realize that there’s $25,000 worth of energy hitting your roof a year’? For large facilities it’s hundreds of thousands of dollars.

“If you look at how much value that bucket captures over time versus the cost of the bucket it’s, well, if it’s not the best financial opportunity that any individual can do, it’s right up there. If you take tens of thousands to hundreds of thousands and multiply that by 30 years it’s a significant value,” Kurtz said.

In 2009 Kurtz created RER Energy Group whose corporate mission is to help clients use less energy, and further to design, develop and install solar energy systems that can help them turn sunshine into dollar bills. By spreading the gospel and the economics of sunshine, RER has vaulted to prominence.

Solar Power World listed RER Energy Group as the top commercial solar developer in the Pennsylvania for each of the past three years, and the company is ranked 684 on Inc.’s list of 5,000 fastest growing companies in the country.

Solar power is growing, and not just because it’s a nice thing to do for the environment.

“Ten or 15 years ago solar was largely a tree-hugging business,” Kurtz said. “People wanted to make a difference environmentally.”

But ultimately it’s money that makes the business world go around, and savvy companies and investors are putting their money where their sun shines.

The economics of solar motivated retail giant Walmart to install solar panels at 254 locations, making it far-and-away the largest investor in solar power among EcoWatch’s top 25 corporate investors in solar power. Walmart produces a whopping total of 105.5 megawatts at its stores, more than double the next company. Apple, Ikea, Campbell’s Soup, FedEx, General Motors, Toyota, Verizon and AT&T are also on that list.

Boscov’s gets it too. That Exeter Township-based, family-owned department store chain, has topped four of its stores with solar panels and is looking to more than double that count. It has saved millions of dollars in electric bills over the past seven years.

The economics of solar are why one in every 50 new jobs in the U.S. is tied to the industry, according to the U.S. Census Bureau.

After working on Wall Street for about three years doing leveraged buyouts with private equity firms, Kurtz came back to Berks County to work for Reading Electric, a company started by his great uncle in the 1950s.

With the support of Reading Electric, Kurtz turned his full-time attention to that new unit and founded RER Energy.

“We identified solar as a growth opportunity,” Kurtz said.

State and federal governments were trying hard to spur growth in renewable energy back then, Kurtz said.

“At that time, in 2009, incentives added up to 120 percent of the cost of a project and I thought to myself, not being a sales person, but by being a finance person, I thought, ‘hmmm. I can sell this.’ ”

So armed with a calculator, Kurtz hit the road.

“We took this message to a variety of companies, and people would say to me: ‘Jim, nobody is talking about solar. We don’t see solar. Why are you here?’ I said ‘well, let me go through the numbers.”

And the numbers were good. Real good. The kind that make accountants squint with glee.

“We were very aggressive in getting the message out. We hosted seminars at Cabela’s and other locations,” he said.

“Electric companies were telling businesses that ‘your rates are going up 40 or 50 or 70 percent’. They were delivering that message while we were coming out with the message of ‘we can do a lot for you with solar’. It aligned.”

Over time, some of the government-created incentives slowly disappeared and RER ventured into New Jersey, New York, Maryland and other states where there were comparable programs, Kurtz said.

“What is not known well today is that since we started in 2009 the cost of systems has dropped 70 or 80 percent. You don’t need all the incentives anymore,” Kurtz said.

When folks like Kurtz talk about “money from the sun,” they aren’t talking about chump change.

Consider the experience of the Boscov’s department store in Vineland, N.J.

In 2011, it was paying 14.5 cents per kilowatt-hour. An ordinary clothes dryer uses about about 2.7 kWh per load, which translates to just over 39 cents per load.

Intrigued by the possibility of big savings on its electric bill, Boscov’s dipped its pinky toe into solar power. Rather than purchasing a solar power system outright, it signed a power purchase agreement, or PPA, with a group of investors who, at no cost or risk to Boscov’s, built an expansive 960-kilowatt solar array on the roof.

On average, that store has saved $70,000 per year on electric bills since striking that deal.

Better still, that price of 8 cents per kWh is locked in until the year 2031 regardless of what happens to energy prices in New Jersey.

Having seen the light, and having benefited from it, Boscov’s continued to invest in solar.

In 2013 it purchased a solar power system for its store in Westminster, Md., where it was paying 13 cents per kWh for electricity. With the full benefit of that 478 kWh system, plus all of the incentives, the store cut its electric usage by 42.1 percent. Compared to its pre-solar days, it used 1.13 million kWh less in electricity in 2017, and saved about $163,000, Moyer said.

That more than paid for the system, according to Moyer, who said most of the systems will pay for themselves in about three years.

An interesting side-benefit of the solar panel-covered roof, Moyer said, is that even if they didn’t produce a dime of savings, the added protection from the sun and all the elements would extend the life of the roof. And, with the roofs no longer absorbing heat from the sun, air conditioning costs have declined, he added.

Boscov’s may add solar to six stores in Pennsylvania, three in New Jersey, and one in Connecticut, Moyer said.

The power purchase agreements are popular, Kurtz said, because they allow organizations such as schools and others to reduce their electric bill without investing in infrastructure.

That’s what the Avon Central School District in New York did. It now has a gigantic, 1.4 megawatt solar array there and it didn’t cost the district a dime.

“Not every school district has the space for solar, and not every district is aware of this,” Kurtz said. “But should they be looking at this? They should. They definitively should. It’s a lot of communication and it’s a lot of education and getting the message out.”

Kurtz said that direct ownership is the way to go for companies and organizations that can afford it.

‘Won’t work for everybody’

“I always have to always temper my enthusiasm about what we do with the realities of the world,” Kurtz said.

“Sometimes you have a tree that shades your roof. Sometimes your roof is not strong enough. Sometimes you can’t connect to the utility. I have learned somewhat to not be so overly zealous and to say solar won’t work for everybody. But if you’re fortunate enough to have a good roof that can capture this energy it will be a very good investment,” Kurtz said.

With the cost of solar power systems declining, the incentives take on less importance, according to Kurtz.

Now it is producing only about 1 percent, and Kurtz believes the writing is on the wall.

“It’s the cheapest form of energy out there. Look at the charts of what’s going to happen. Solar is going to relentlessly take away market share from other forms of generation because it’s cleaner and its cheaper.

Recent tariffs imposed on imported solar panels will not stem the tide of solar.

“It’s lead to a 6 percent increase in our costs,” he said.

But with the decline of production costs over the past few years, it’s not making a difference.

And in a world where money talks, Kurtz points to rising investment in solar.

“Some of the largest owners of solar in the world are utilities,” Kurtz said. “You think that utilities would be anti-solar. They’re not. They get it. They get that these plants are incredibly efficient, so they’re rapidly integrating them into their system. Duke Energy, Constellation, Washington Gas and Electric, Dominion. They’re being very savvy. They know that when they put the bucket in, and they can generate energy at 3 or 4 cents per kWh over the next 30 years, and they know they can sell it to you for a lot more. And our point is, ‘own the bucket.’

“Investors are not investing in coal plants,” Kurtz said. “Nobody is going to put the money into them because it’s not foreseen past this administration that this will be the policy. The rest of the world is moving beyond that. We know how politics work. In the long term, economics will win out.”

As originally published on www.readingeagle.com.