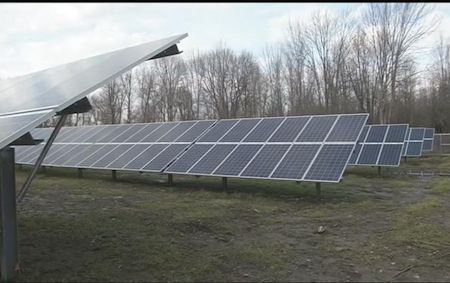 Spread out over 1.5 acres are more than 1,100 solar panels soaking up the sunshine.

The solar array is a project in Clifton Springs is something Walt Pieschke with RER Energy Group has been working on for a few years now. Ultimately, he says it’s a great investment by the village.

“They’ll save, even over the first 25 years, over half a million dollars,” said Pieschke.

Brianna DiPilato: “How is this beneficial on the days we don’t see sun?”

Walt Pieschke: “You will still get contribution, you won’t get anywhere near as much and the financial basis of doing this is based on what the average is.”

But who fit the bill to put the panels up? Pieschke says it was the investor AEP, the system’s third party owner. They’re also responsible for the site’s maintenance.

“For the village, it’s remarkable because it’s really no cost to them,” said Pieschke.

Pieschke also says it’s no cost to taxpayers. The panels pump power directly into the grid, ultimately giving residents a credit on their bills.

“All the meters that the village has they get credited for all the power we put in here,” says Pieschke, “the financial benefit, they’re saving on their bills immediately.”

It’s an energy source homeowner Kathy Keller says she wishes she had in her neighboring Town of Phelps. “I see no future in fossil fuels; I think solar and wind is the only way to go — renewables and the sooner we get there the better.”

Canandaigua also has solar panels. Neighboring towns like Farmington, have put the solar panel plans on hold for the next few months while they try to work out the kinks.

About RER Energy Group
RER Energy Group is an industry leader in providing cost-effective, high-quality solar systems throughout the United States and Latin America. The company has developed more than 45 megawatts of solar energy, obtaining over $30 million in grant proceeds for commercial, industrial, agricultural, municipal, and non-profit customers. For more information, visit www.rerenergygroup.com.