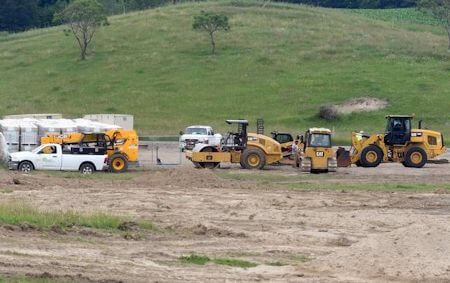 As originally published on romesentinel.com.

A solar array is about to be constructed in a former farm field on the north side of Route 69 that is expected to save Camden Central School millions of dollars in energy costs over the next 20 years.

Assistant Superintendent of Business Karl R. Keil Jr. said back in 2014, the school district received a grant for $974,615 for the project.

The funding was part of Gov. Andrew M. Cuomo’s initiative to award 142 solar projects to businesses and schools across the state.

In August of that year, Camden began working with RER Energy Group out of Tully, Onondaga County, to apply for a grant from the New York State Energy Research & Development Agency (NYSERDA) and the school was awarded the grant by Cuomo on Sept. 19, 2014.

Keil said the district now leases 12 acres at 2889 Route 69, which was the former Kelly farm. About 25 years ago the land was purchased by the village and was used for sludge disposal and sand mining, he said.

Camden Central School worked out a long-term 20-year lease with the village for 12 acres of the land for construction of the solar array. Keil said the district has received all necessary permits for construction and contractor Pfister Energy, of New Jersey, is now doing the topography work at the area to prepare the site.

Pfister “is finishing up a project at a Madison County landfill now” and once finished, can begin work in Camden, Keil said.

“The steel brackets will be installed by about the first of August,” the assistant superintendent said. “Over 8,000 solar modules are being delivered to the site, and they’re gearing up for actual installation within the next few weeks. We’re working with National Grid to energize the system in mid to late October.”

The school district is investing no money into the project as construction moves forward. District voters approved a referendum to lease the 12 acres for the project back in March 2015.

“It will be seamless for us to have a utility bill with this new company (Pfister)” rather than National Grid,” Keil added.

“We project the economic savings to the district over the next 20 years to be around $2.5 million,” he said. “Our Board of Education thinks it’s the right thing to do…The project supports clean and green renewable energy and it will decrease our dependence on fossil fuels for energy. Overall it’s good for our school community and community as a whole.”

As originally posted on romesentinel.com.