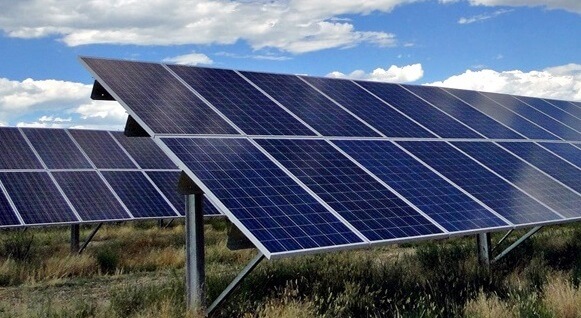 The Town of DeWitt is taking a step towards renewable energy and has begun work on a new solar array that will pay for the town’s entire electric bill.

Did we mention the panels are being installed on the old DeWitt Landfill?

The $5 million dollar project will be privately financed by RER Energy group and will include over 7,000 solar panels. It will take up 11 of the DeWitt Landfill’s 50 acres along the Old Erie Canal Historic Park Trail.

When finished it will generate 2.66 Megawatts (MW).

“That translates to all the towns electric consumption to all our buildings all our facilities all our street lights our water pumps, our sewer pumps anything the town pays an electric bill on,” said DeWitt Town Supervisor Ed Michalenko.

RER Energy Group will lease the acreage and in-exchange the town will receive energy tax credits. The town is expected to save $70,000 annually.

“The solar panels are going to cover the tops of the hills and the southerly slopes. The idea was to maximize the amount of electricity you could produce in a minimal amount of space, minimal materials and therefore at minimal cost,” added Michalenko.

Since closing in 1994, the DeWitt Landfill has been vacant and remains listed as a toxic-site that is regularly monitored by the NYSDEC. When it comes to redeveloping an old dump it’s no surprise your options are limited, but more towns are turning to old landfills like DeWitt’s as locations for renewable energy.

Michael Roach who is managing the project for RER said crews have completed a site survey and the rigging and wiring for the solar panels should be going up in the coming weeks. The solar panels are arriving in September and testing should begin in October.

The goal is to attach the entire array to the grid around the start of 2020.

As part of their agreement with RER, the Town of DeWitt will have the option to buy the array seven years into their 25-year contract.

RER has worked on several other projects around New York, in the Town of Lincoln in Madison County and Ogdensburg in St. Lawrence County.